About 3 years ago, around this time I had the great misfortune of having to work on my 30th birthday. Which would have been totally terrible, if I wasn’t in Barcelona, Spain. Even though my week was packed with meetings, client dinners and parties, I did manage to play tourist and take in some of the sights; Gaudi’s Sagrada Familia, the Ramblas, an evening or two (or three) enjoying the nightlife down the street from my hotel on Barceloneta beach and a cooking class where we learned how to make the Catalonian classics such as Escalivada, Paella and the famous Tortilla Española.

You really can’t go wrong with potatoes and onions; it was one of my favorite things I ate during my trip. Its one of the most popular dishes in Spain and you’ll typically find these served in bars as tapas but is also great for a light summer dinner. Its light, yet hearty and even my dad who doesn’t like trendy food totally loved it.

Whatever you do, you want to make sure that all of your potatoes are the same size. That will ensure even cooking time. 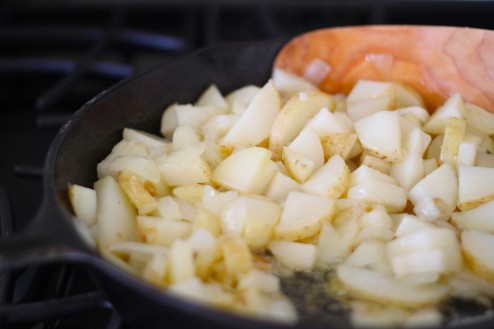 I don’t know about you but my natural inclination is to crank the flame up and get these guys cooked, however the key to the Tortilla is patience.

Here is where I took my last photo on the process. Apologies. I will however, describe for you what I did next.

After scraping all of the chorizo (I used Mexican chorizo, definitely use Spanish – it doesn’t break apart) and mixing it into the potato, I poured in the eggs. I started with 8 but then realized I probably needed a few more so I just beat them quickly and poured them in.

You want to make sure the flame isn’t too hot otherwise you will start to scorch the eggs and they will stick, trust me. Run a knife or spatula around the sides, place a plate over top and then with potholders, invert it onto the plate. Place the skillet back on the flame with a pinch of oil and then slide the tortilla back in the skillet. Cook slowly until center is done – just check it with a knife. 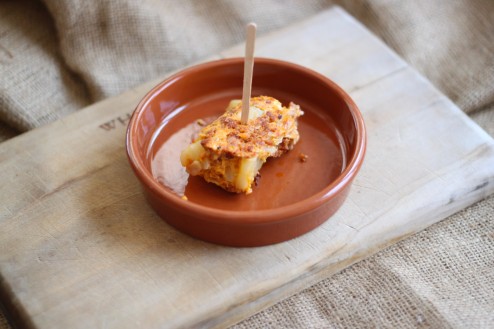 After you let it cool, then you cut it up into squares or slices or rectangles as I have done above. I’d go with squares if I were you – they are just more interesting. 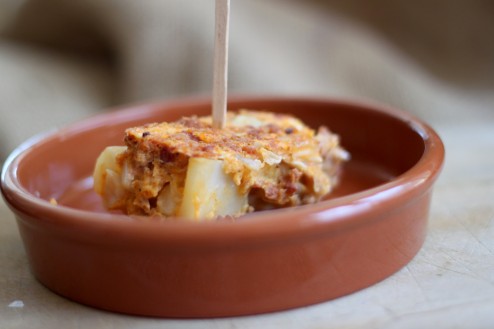 I’m all about authentic serving dishes – it’s a disease people! If you are going to be cooking Mexican food, it needs to be on pretty painted Mexican clay pottery dishes. Moroccan food? There better be a tagine involved.  I served my lovely little Spanish Tortilla tapas in authentic Cazuelas like you would find in Spain. Again, its a disease and please don’t look in my cupboards. Enjoy!

Pour onions and potatoes into the skillet and gently stir into chorizo until very well combined. Pour in egg mixture; stir gently until just combined. Cook, running a flexible spatula around the edges occasionally, until edges set and center is slightly runny, 6 to 8 minutes.

Place a plate, upside down, over skillet, and invert tortilla onto plate. Slide tortilla, cooked side up, back into skillet. Cook over low heat until completely set in the middle. Remove from the heat and let cool for 10 minutes before slicing into squares.