I made it a whole two days into Fall before I was in the kitchen braising up a storm. I had been waiting for my first braised short rib dinner for some time, so when the opportunity arose, I took it. Even though it wasn’t cold outside the day I made these, I pretended it was.

There is something almost magical that happens during the braising process. It takes an average cut of meat and turns it into something spectacular. It is probably one of my favorite cooking processes and while there is a bit of prep work needed on the front end, when you pull them out of the oven they are so worth it.

I have been adjusting my recipe for some time now and I think I finally have it the way I want it. Every time I make them, I do something a little different. It is by no means in its final state but each time I feel like I’m finally on my way to braising perfection.

So, with all of that said please make these and feel free to deviate off my recipe. If you think that you can improve it by changing something, they by all means please do it- I want you to.  Iteration breeds excellence. 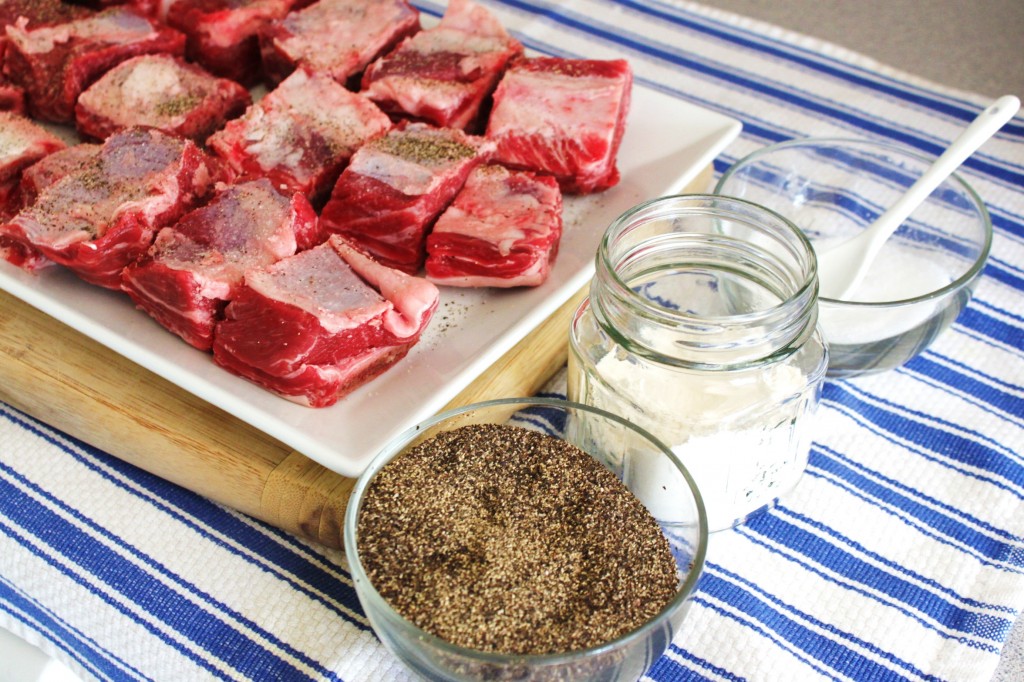 Before you even cook the short ribs (or any other meat for that matter) you want to bring it to room temperature to ensure even cooking and you also want to ensure that it is completely dry so that a nice brown crust forms. If there is any moisture on the meat, it will steam and turn into a gray mess. You want brown. Brown = flavor.

I have my butcher cut my short ribs even shorter, to about 1 inch long but you can leave them their standard length if you want. 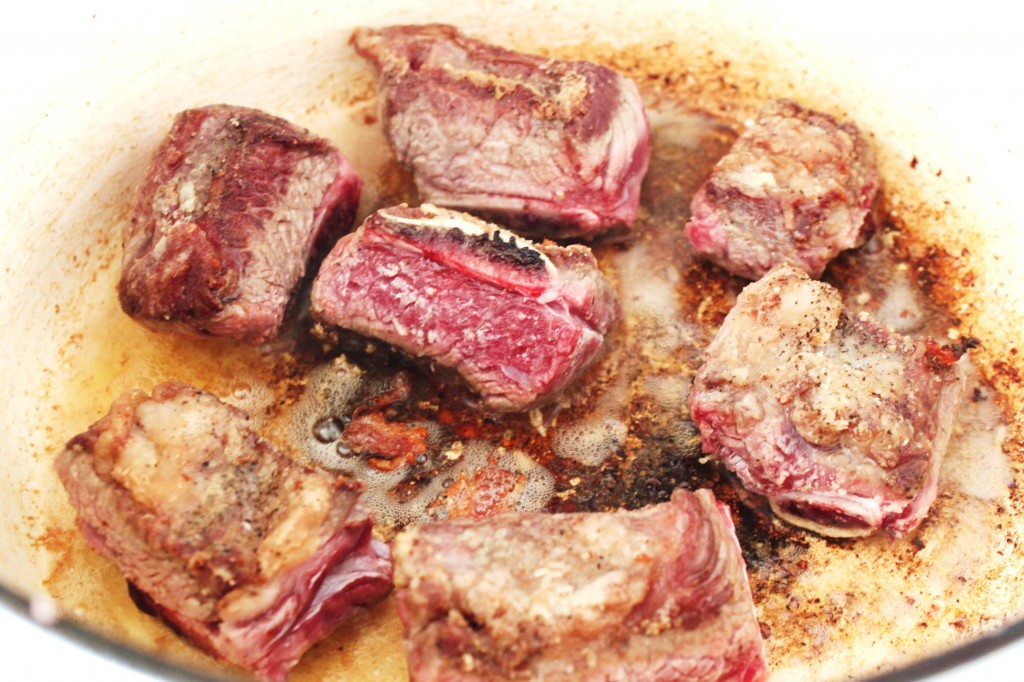 Cook your pancetta or bacon until crispy and set it aside. I used bacon because that’s what I had but I prefer pancetta – it has a better, stronger flavor.

Leave drippings for the short ribs. Once they start to brown pull them out and set aside.

Next up, the mirepoix. Mirepoix is a French culinary term for the aromatic vegetables of onions, celery and carrots which are the base of stocks, stews, sauces and braises. In Italian cuisine its called soffritto.

I choose to add my flour now, it just ensures that it cooks down properly and doesn’t go lumpy. 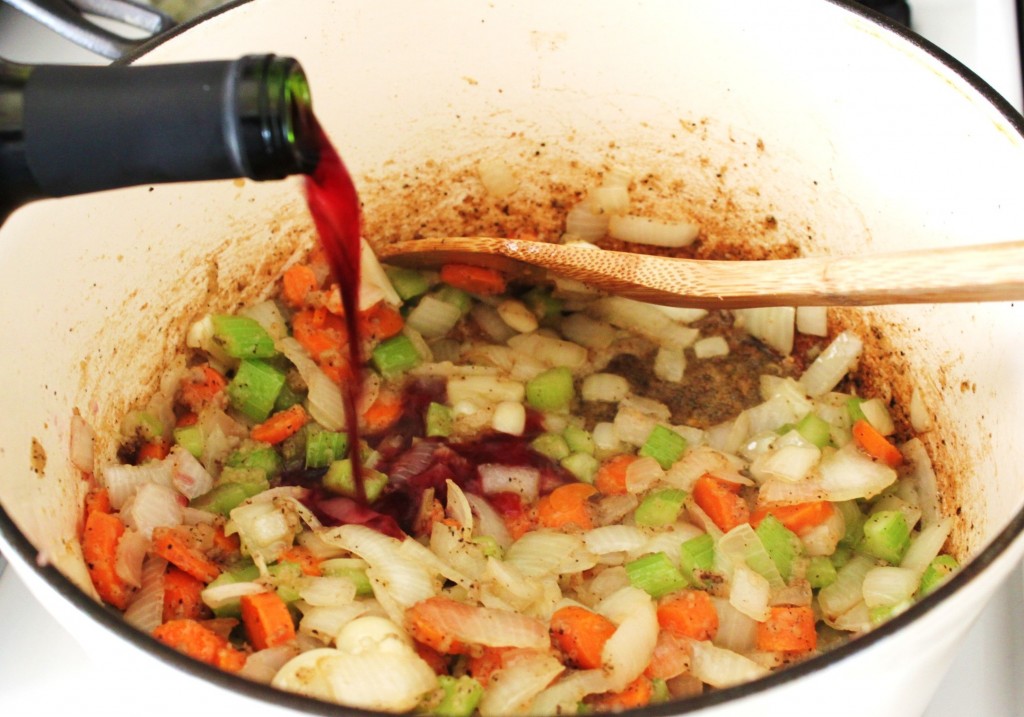 The magic of deglazing. This is a super important step so don’t skip it.

All those caramelized solids on the bottom of the pan that we have been building up with the bacon, ribs and now the veggies has incredible flavor and when you pour the wine in,  it begins to loosen them and dissolve them into the dish. This is where the incredible flavor comes from.

When cooking with wine, I use ones that I would actually drink. In this instance, I used a Cabernet Sauvignon. Its a flavorful, strong red that can stand up to the rich meat. 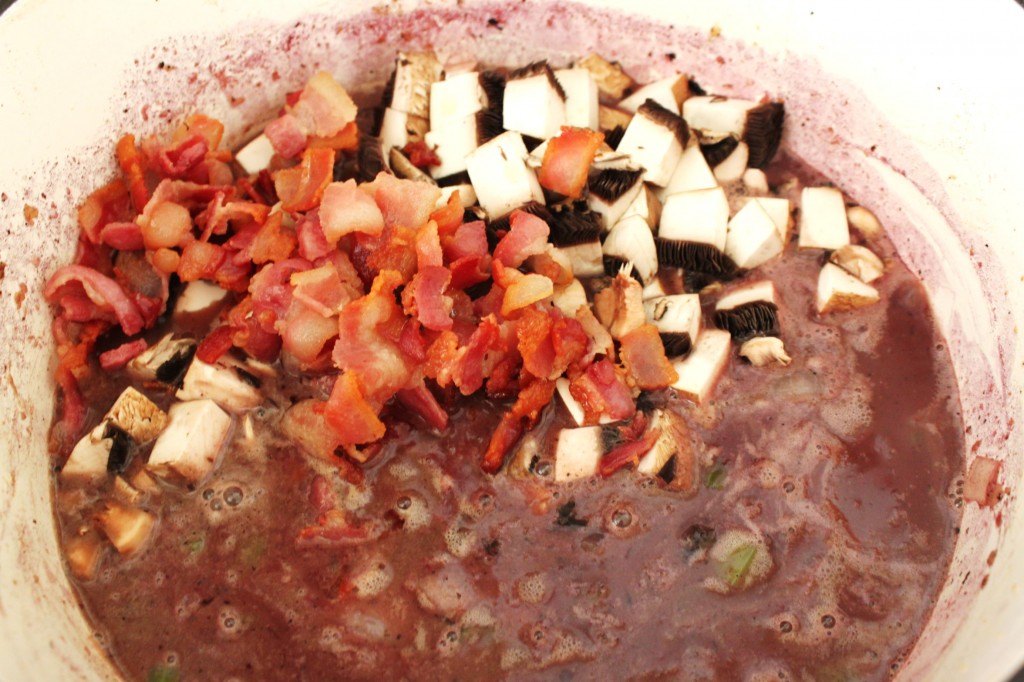 After deglazing, add the cooked bacon, mushrooms and stir them in. Place the short ribs back in as well, pushing them down a bit. Add in your stock until the ribs are not quite covered. Place your bay and oregano on the top.

The next essential step is adding a piece of parchment paper in between the pot and the lid. This causes a bit of steam to escape during the cooking process and thus, the liquid reduces, intensifying the flavor. 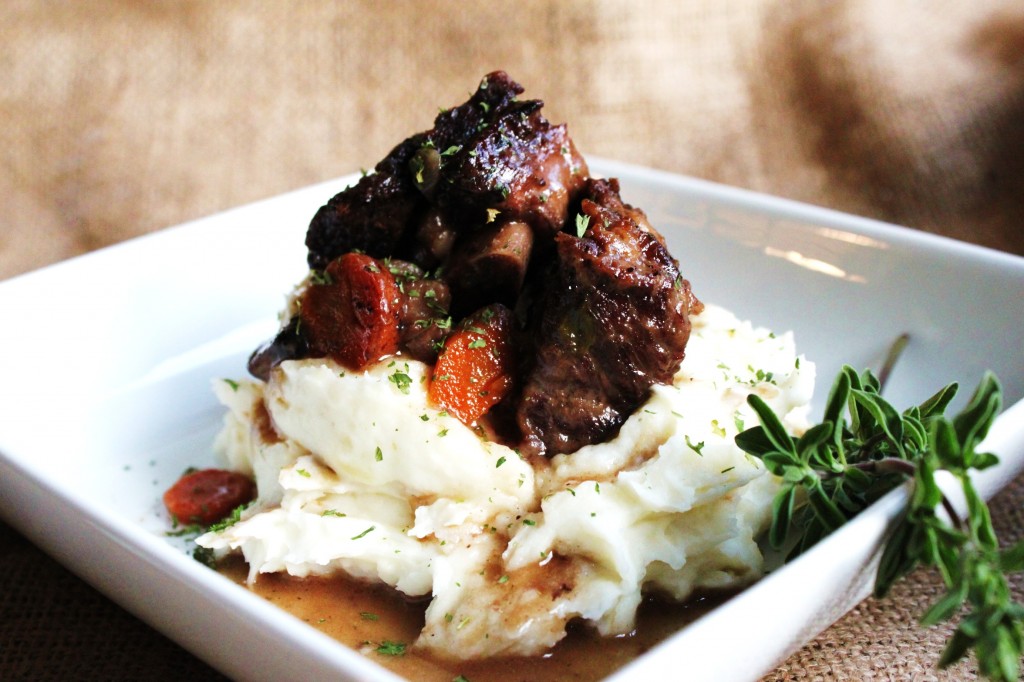 Voila! I serve my short ribs on a bed of fluffy mashed potatoes. It only seems right to do it that way. These were pretty darn delicious.

Let’s just say that it was pretty quiet around the dinner table. I hope you get to make these very soon!

In a Dutch oven, heat a few sprinkles of olive oil and cook pancetta or bacon. Once brown and crispy, remove from heat and set aside.  Take ribs and sear until a brown crust forms being sure not to cook all the way through. Take out of dutch oven and set aside.

Sprinkle dutch oven with more olive oil. Add the mirepoix (diced celery, carrots and onions) in a bowl mix it with salt, pepper and remaining flour. Stir to coat and then add them to the pot. Cook down until softened. Add garlic and stir.

Deglaze with the red wine, scraping all of the brown parts off the bottom of the pot. Stir in the bacon and mushrooms. Place the short ribs in the mixture. Pour in stock until the ribs are almost covered. Add herbs.

Place parchment paper sheet on top of the pot and cover with lid. Cook on 300 degrees F for 3 hours.