Being a New Zealander raised in Los Angeles, there are certain things that stick out in my mind during my childhood.  One of those things is the infamous Pavlova.

The Pavlova is named after the Russian ballet dancer Anna Pavlova who toured New Zealand in the 1920’s. The origin of the Pavlova is debated,  with both New Zealand and Australia taking credit. The Pavlova is typically served at celebrations and usually is a summertime treat. Which is appropriate being that its 84 degrees today in here in the middle of winter (sorry to the rest of the country who are currently freezing their you know what’s off!).

My mom would make a Pavlova (or Pav for short) on special occasions or as a taste of home for other Kiwi’s who would come over for dinner. I remember my sister and I were not allowed to be anywhere near the oven as the Pavlova cooled as though our running around would cause the dreaded cracks in the meringue. Which is really funny considering when you slice into the thing it kinda cracks and turns into a big, yummy, sticky, marshmallowy mess anyway! 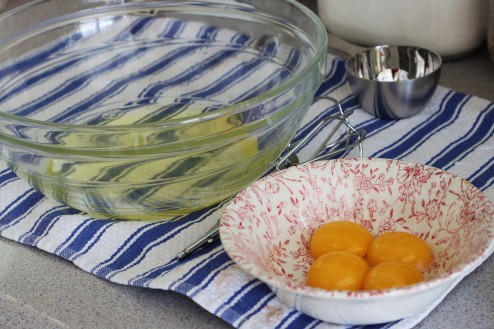 Here are the eggs and egg whites separated. You really want to be careful here, any yolk will mess things up later in the process. 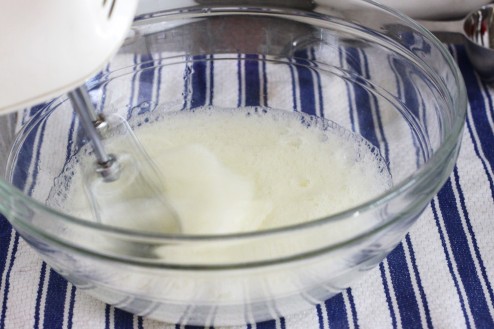 The beginnings of the meringue. 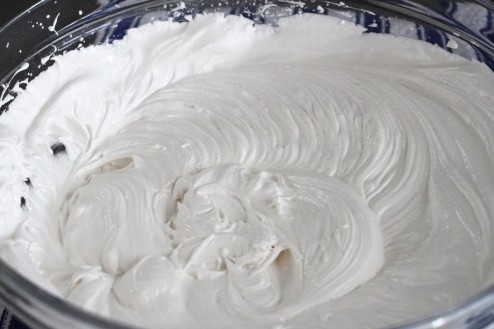 Nearly done. You want it shiny. 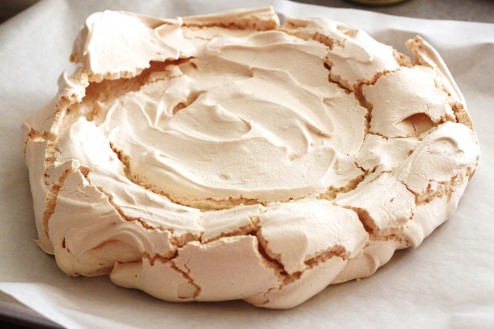 The key is to have the right ratio between the crunchy meringue and marshmallow center. I wanted to have a more even ratio so you’ll see below that I chose to hollow out the center a little bit. This also creates a great little nest for all the whipped cream and berries you are going to put on top. 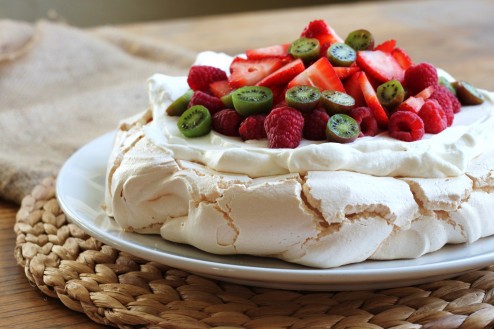 Seriously, you have to try kiwiberries. They are so yummy! 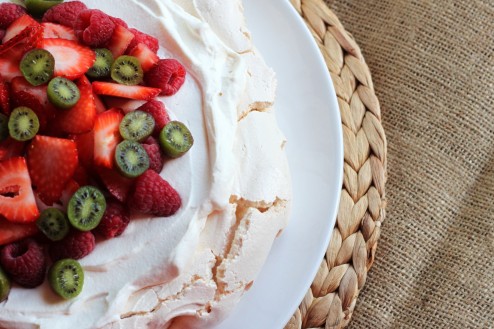 I hope you get to make one soon!

Preheat the oven to 300 degrees.

Choose a bowl that is clean and free of any form of grease and beat the egg whites on high until very fluffy about 2 minutes. Its important to make sure there is no trace of yolk in the whites, the fat will inhibit the egg whites.

Reduce mixer speed and add the sugar until the mixture is thick, glossy and the peaks are hard. Add in the cornstarch, vinegar and vanilla until combined.

Line a baking tray with parchment paper. If you want more marshmallow, pile it up high. If not, flatten it out a little bit, making a nest in the center.

Bake the pavlova for 50 minutes, until it very firm. Once cooked, turn off the oven and let cool completely. Do not open the oven until the pavlova is cooled.

Just before serving whip up the cream and slice the berries. Remove pavlova from the baking tray and add it to the serving dish. Cover the top with whipped cream, berries and serve in slices.