Well, it’s noon the day after Thanksgiving, I’m sitting in the kitchen in my pajamas watching the rain. Yes, I said rain! Here’s my thyme on the farm table soaking up the rain drops. 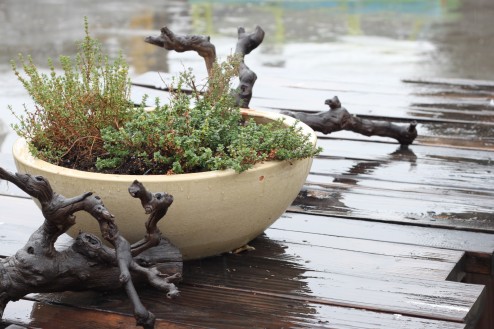 It’s literally the perfect day – its raining here in Los Angeles (which is so, so rare), I’m not at work and I’ve given myself permission to not freak out about all of the clean up that still has to be done.

This week has been a blur – work was super busy, my sister’s birthday was Tuesday and I was behind on my Thanksgiving prep from the start. I had had uber lofty projects and plans for this Thanksgiving that didn’t happen – sometimes you just have to cut your losses and press on.

Even though I didn’t accomplish everything my overachiever self had planned, it still was a great day filled with good food, good people and great times. 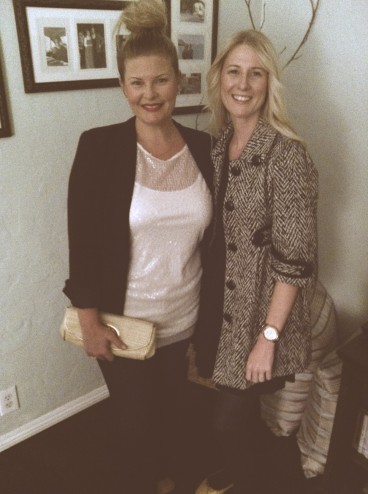 Here is a picture of the birthday girl and I Tuesday before we went out to dinner. She chose our favorite little spot in Laurel Canyon called Pace. Its probably one of my favorite places in LA. I always get the Hercules Pie, which is an amazing wood fired pizza with an amazing crust served on a cedar plank. They have an amazing cedar plank salmon as well as a New Zealand rack of lamb that are both to die for. If you live here, you have to go.

It’s tradition that there must always be a trip to Sweet Lady Jane for a slice (or two) of their famous Triple Berry Shortcake. We debated for 20 minutes on what we were going to get in addition to the shortcake. We ended up not being able to stay and eat because they were gearing up for one of their busiest days of the year – the day before Thanksgiving where they would be selling over 1,000 pumpkin pies and hundreds of their $90 apple pies which I are like pieces of art. 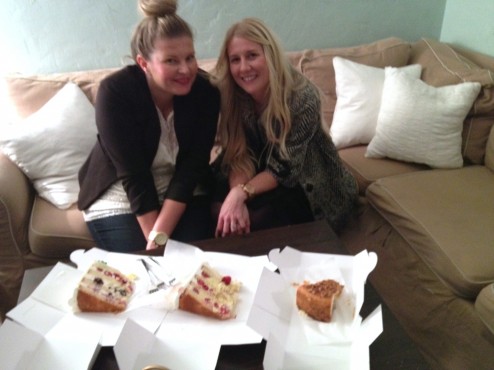 Later that night with our spoils, enough said.

I have to say, its really good to have my dad back from Australia for a couple of months – we’ve missed him! 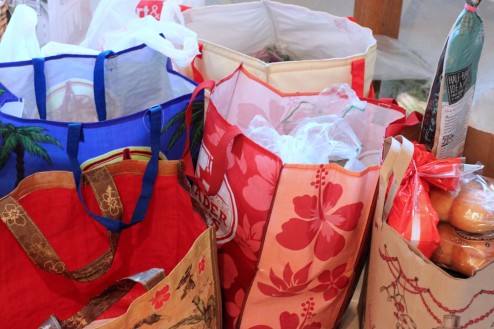 On the day before Thanksgiving, I was up at 5am and called it a night around midnight. Lot’s of last minute shopping (hence my grocery bags above), lots of cooking, lots of cleaning – ironing napkins, washing stemware, prepping serving dishes, etc. Long, long day. 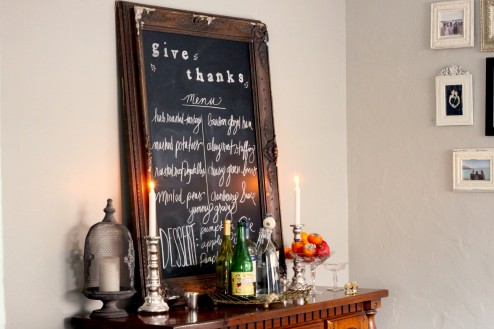 I had been wanting to make a chalkboard for over a year now but I couldn’t find the right frame . Then at the November Rose Bowl Flea Market I found an already made framed chalkboard that I was nearly going to buy for $170 but at the last minute decided not to. Then on the way out to the car, I found the perfect frame – old and a little banged up. It was perfect and it was $30! So after spending $10 on the board and another $10 on chalkboard paint – I had myself a stunning, dramatic piece that I am proud to have in my house! A big thanks to my dad who actually cut the board to size and professionally painted it with one of his spray guns he uses to paint his classic cars – no half measures around here!

Speaking of my dad, I printed out letters for the ‘give thanks’ portion so I could trace them onto the chalkboard, I gave to my dad to cut out totally forgetting that he is left handed – let’s just say the letters I got back looked like they were cut out with a chainsaw. Beggars can’t be choosers.

The cutest part of that whole thing was that my very manly, car racing, dad was so, so excited to make the board for me – I’ll remember that for the rest of my life. 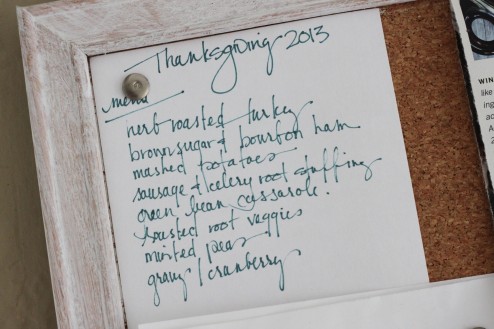 I have a fairly standard menu for my Thanksgiving most of which you can find the recipes for on the blog already and a few new ones which are below. 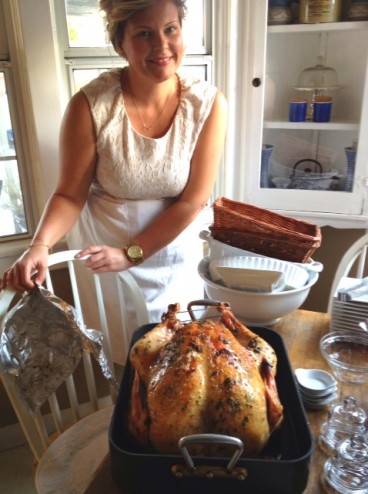 Herb Roasted Turkey – this Martha Stewart recipe is absolutely perfect. I change it up a little to suit my tastes but overall its pretty amazing – moist and flavorful. I’ll probably never deviate from this recipe.

Bourbon Glazed Ham – two words, Makers Mark. Just add honey, brown sugar, orange and bourbon and you’ve got yourself an amazing ham glaze – its really all about the glaze.

Celery Root & Sausage Stuffing – a crowd pleaser and a staple of my Thanksgiving dinner.

Kristin’s Amazing Green Bean Casserole – its like crack, in a good way.

Roasted Root Vegetables – I left out the duck fat this year and added in fingerling and purple potatoes.

This year I made two versions of cranberry sauce – my standard cooked one and a raw one.

In a saucepan, add cranberries, sugar, orange juice, vanilla and half of the zest. Cook on medium high heat until the cranberries burst but keep their shape, about 10 minutes. Remove from heat and let cool for 5 minutes. Pour into heatproof serving bowl and top with the remaining orange zest. Best served warm.

In a food processor add the apple and pulse about 10 times. Add in raw cranberries and pulse until desired consistency. Pour apple cranberry mixture into a bowl and stir in the sugar, juices and ½ of each of the zests. Mix until well combined. Add into serving dish and top with remaining citrus zests. Chill until ready to serve.

For appetizers, my sister brought an amazing cheese and charcuterie platter and I made my famous stuffed mushrooms and onion jam – so, so, stinking amazing however, I didn’t get any pictures of it.

In a saucepan, add the oil. Once hot, add onions and cook over medium high heat until golden about 10 minutes. Add in the herb bundle and bay, stir in and cook for another 15 minutes. Add sugar into the onions but don’t stir. Once a deep amber caramelization occurs, stir in the vinegars and deglaze the pan. Add the bacon, reduce heat to low until the jam becomes thick, approximately another 5 – 10 minutes. Season with salt and pepper to taste. Let cool for 20 minutes before serving. 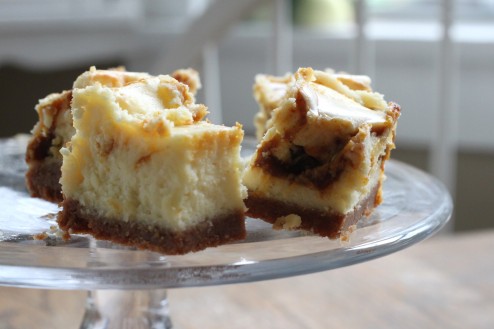 Remnants of my very popular pumpkin swirl cheesecake squares. I may or may not have snuck one of these at 7am when I got up to make the coffee. 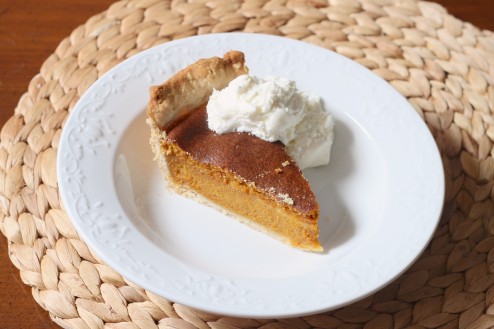 Pumpkin cheesecake squares aside, the real star of the dessert show yesterday had to be my friend Shane’s, of So Pretty, apple and pumpkin pies! Everything Shane makes alway turns out so, so good – his wife Carrie, also a great cook in her own right, is one lucky lady. This piece is all mine, I grabbed it last night specifically for today where at a time of my choosing, I will eat it and I will not be sharing. 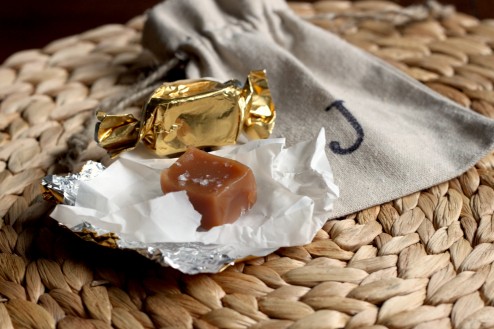 You know how I mentioned I had over zealous plans for Thanksgiving, well this was one of them. I found these amazing little linen bags which I added everyones first initial to as a way for them to find their seat. Now, a normal person would find awesome candies or mints to fill them but oh no, I had to go ahead and make my own caramels.

In a saucepan or in the microwave, heat cream and butter until the butter is melted. Take a small pan, about 9×5 or so and line with oiled parchment paper. Set aside.

In another saucepan, add the corn syrup, water and sugar and bring to a boil being careful to wet the sides of the pan so sugar crystals don’t form. Using a candy thermometer, bring the sugar to 320 degrees. Add the melted butter and sugar slowly stirring constantly. Bring back up to 240 degrees (soft ball stage). Pour sugar mixture into pan and cool in the refrigerator for 15 minutes. Sprinkle the sea salt and chill for another 30 minutes. Slice and serve on a platter or wrap.

Note: this is a soft caramel, if you want a firmer caramel, take the second boil up to the hard ball stage (245 degrees). 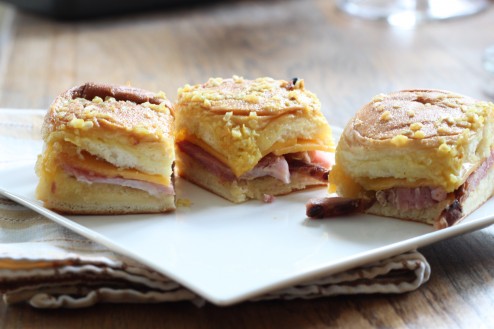 This was what I made this morning for morning tea. Leftover Hawaiian bread rolls sliced in half with yesterdays ham and cheddar, topped with 3 tablespoons of melted butter, 2 teaspoons of yellow mustard and minced dried onions. Baked in the oven at 350 for 8 – 10 minutes until cheese has melted.

I can’t take credit for these. My friend Kiira of EyeHeartPrettyThings, made something similar over the summer for a get together and they were amazing. 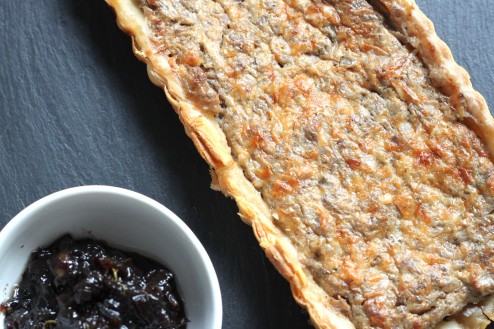 This was todays lunch. Leftover stuffed mushroom mixture baked in puff pastry and topped with that onion jam I told you about. Amazing.

Well, that was my busy and amazing Thanksgiving. I hope you had a wonderful day as well.