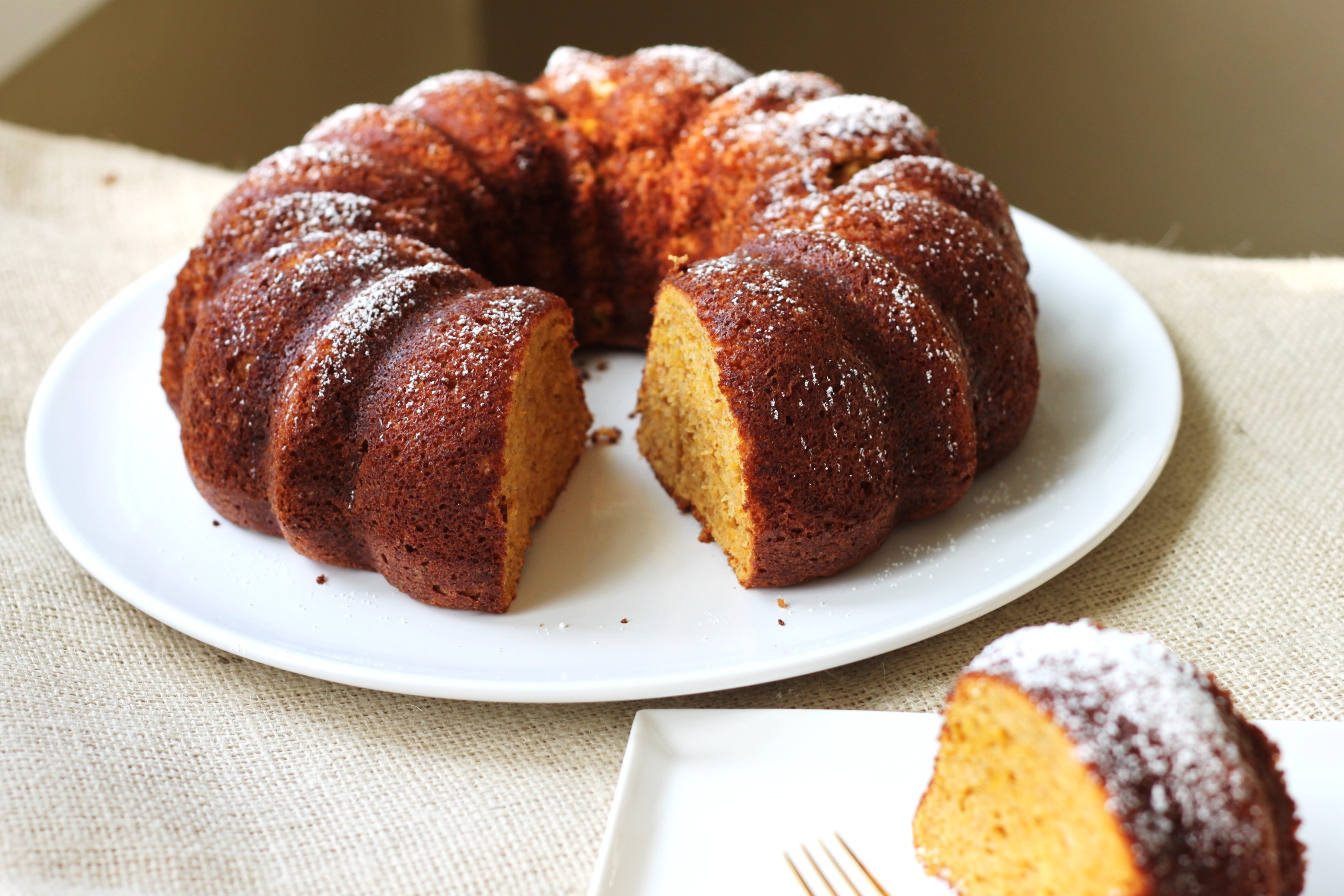 It’s almost November and I haven’t made nearly enough pumpkin related items – unacceptable.  Pumpkin only happens once a year friends. To remedy this situation I bring you the awesome pumpkin chiffon cake. Light, spicy and pumpkin all baked into one beautiful, simple and elegant looking cake.

Before we get into it, one note on the process and baking in general. Even though the cake looks simple it actually has a few semi-complicated techniques, such as folding. The ‘chiffon’ in the title comes at a price people but don’t be afraid, you are going to do great.

So I’m just going to put it out there – baking is more of a science and less of an art. I enjoy cooking for its improvisational perks that allow last minute change ups and all sorts of deviation. Baking is not quite as forgiving. The measurements must be exact and the steps must be performed in order.

I have never been much for strict rules, I’m more of a ‘let’s-try-it-and-see-what-happens’ kind of girl. I’ve learned the hard way that you really can’t have that mindset when baking. As a result of my imprecision (and haste), I’ve pulled a number of sub-par items out of the oven.

So measure exactly, follow the steps to the letter and you will be golden.

First up, put all of your dry ingredients in a bowl.

Just a note, I buy whole nutmeg and grate it with my microplane. I love freshly grated nutmeg – but watch those fingers. 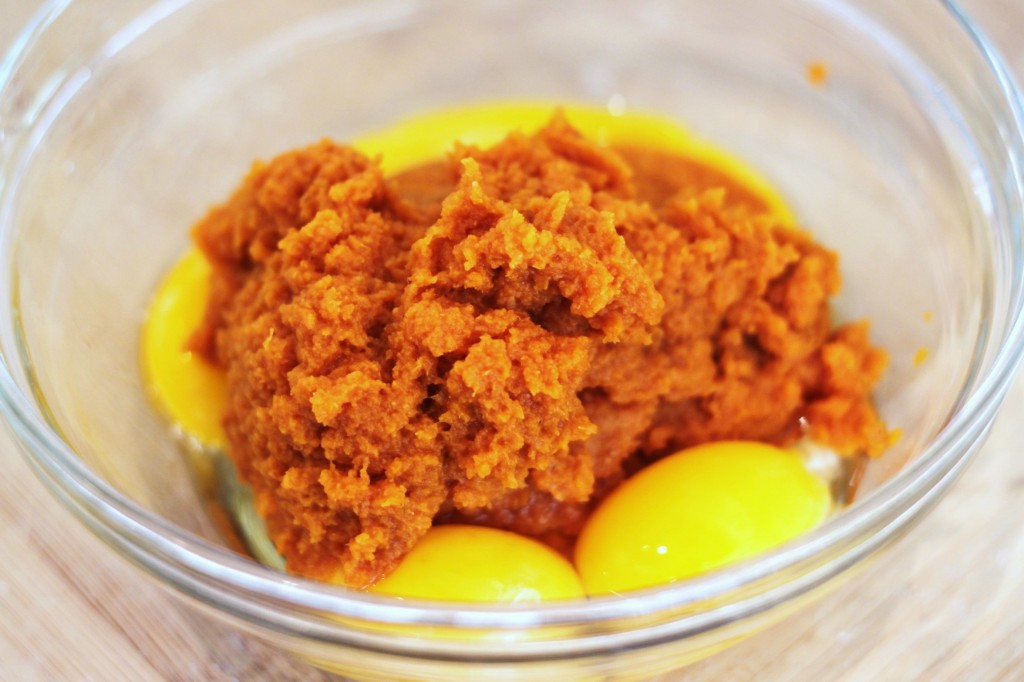 Next up, you want to separate your egg yolks and whites. The whites get set aside and the yolks go into the pumpkin.

Mix them up together until smooth and well combined.

Add the egg pumpkin mixture to the dry ingredients. 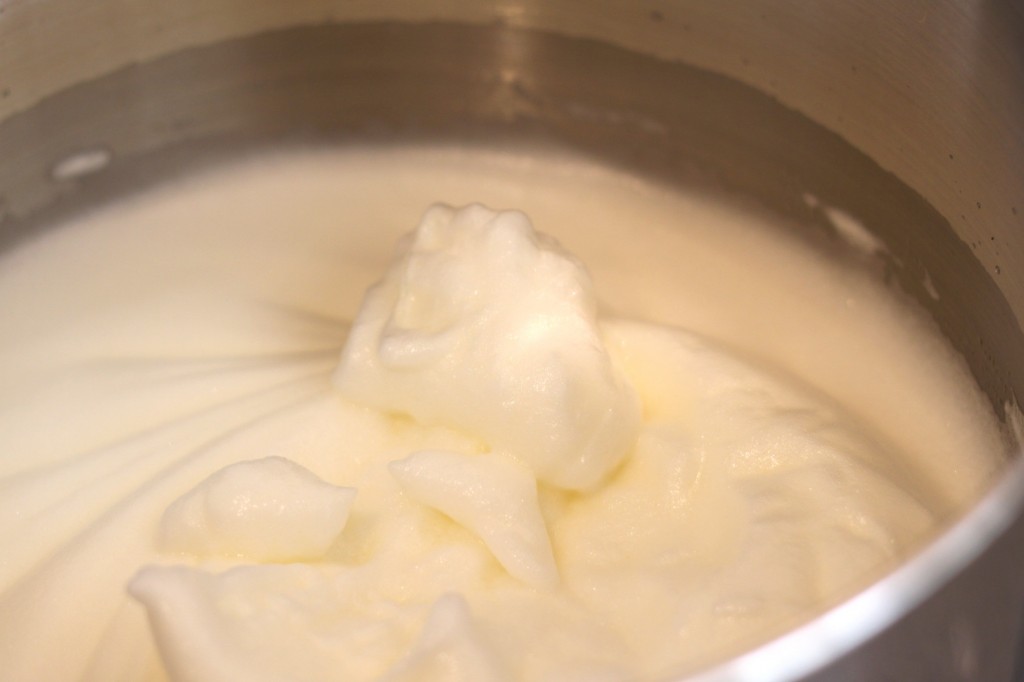 Its hard to explain the various stages of egg whites aka meringue, just go with your gut – you will know when to stop the mixer. I promise. 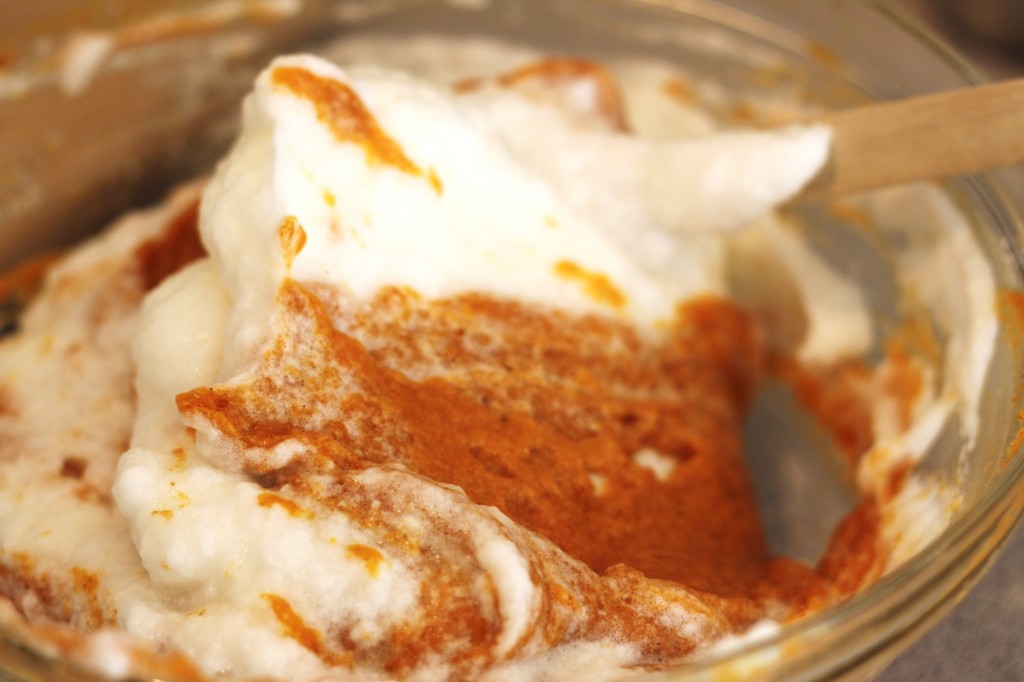 Now for the next technique heavy part – last one, promise!

Take 1/3 of the mixed egg whites and slowly fold into the pumpkin batter.

If you are a pro baker, no need to read on – just go to the next step. Now folding is a technique that is pretty key to this recipe. When you fold, you mix things together without taking all that lovely light air you put in your egg whites. Its a slow process but the result is light and tasty.

In one single action, take a rubber spatula or a large spoon and run it around the inside of the bowl and base, pushing the mixture in on itself. You want to combine it from sides of the bowl and not the center. Its a very gentle process.

Then take that mixture and fold in the rest of the ingredients. Technically you are supposed to take the lighter ingredient and mix it with the more dense. Fold until there are no white streaks left. 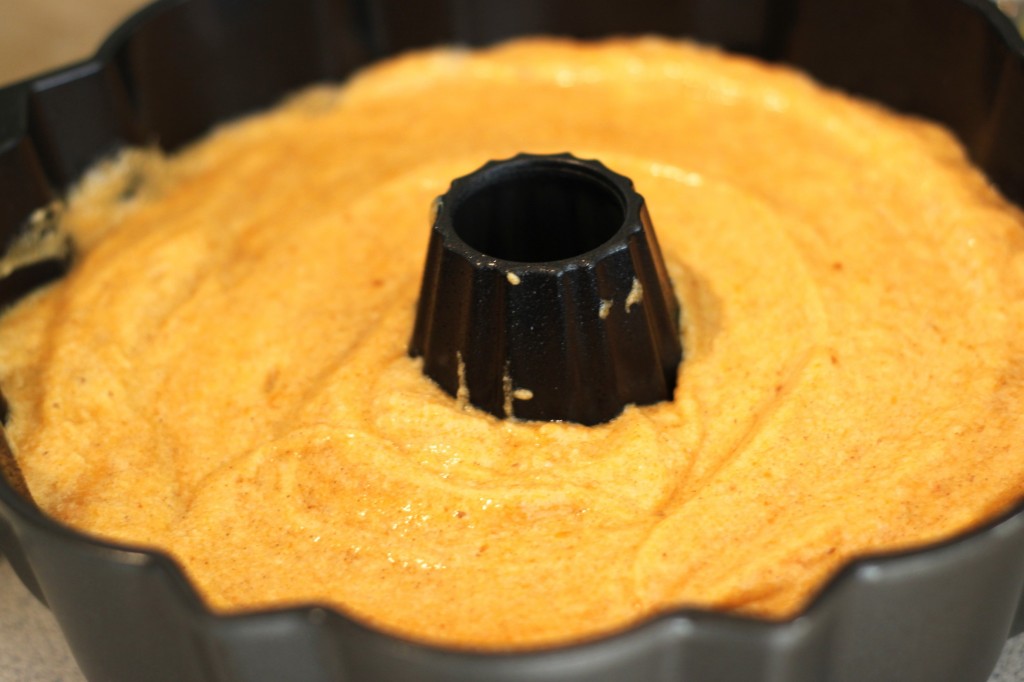 Add the finished mixture into your bundt pan.

You want to make sure its well buttered and floured to ensure no stickage (I made that word up). 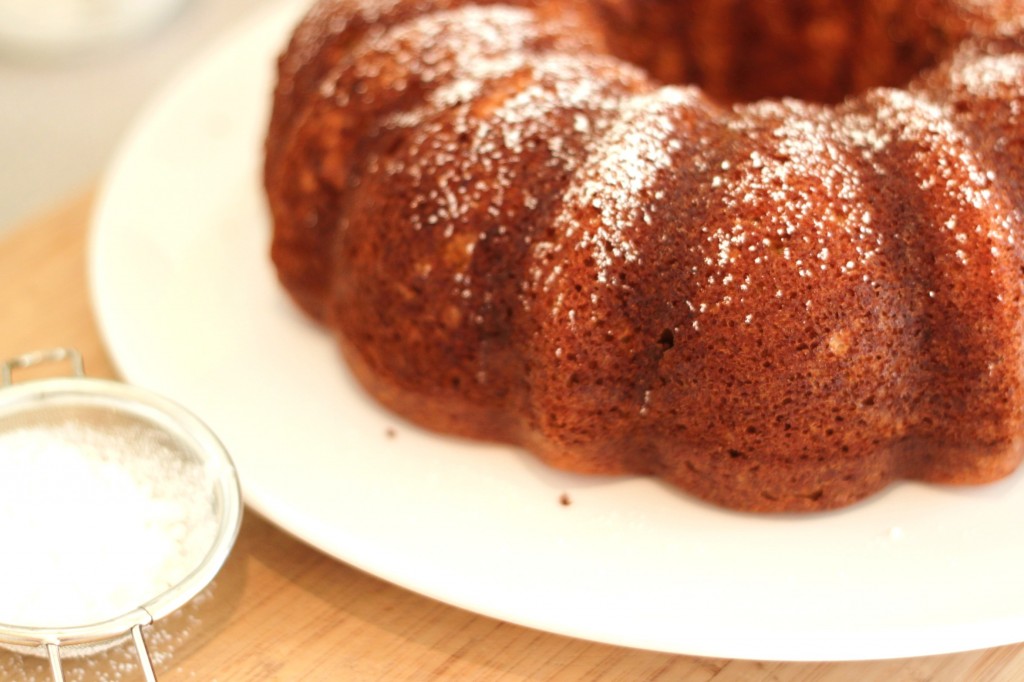 Lightly dust with powdered sugar once its cooled down.

If you feel up to it,  you could also make a light icing glaze instead and drizzle it over the top. 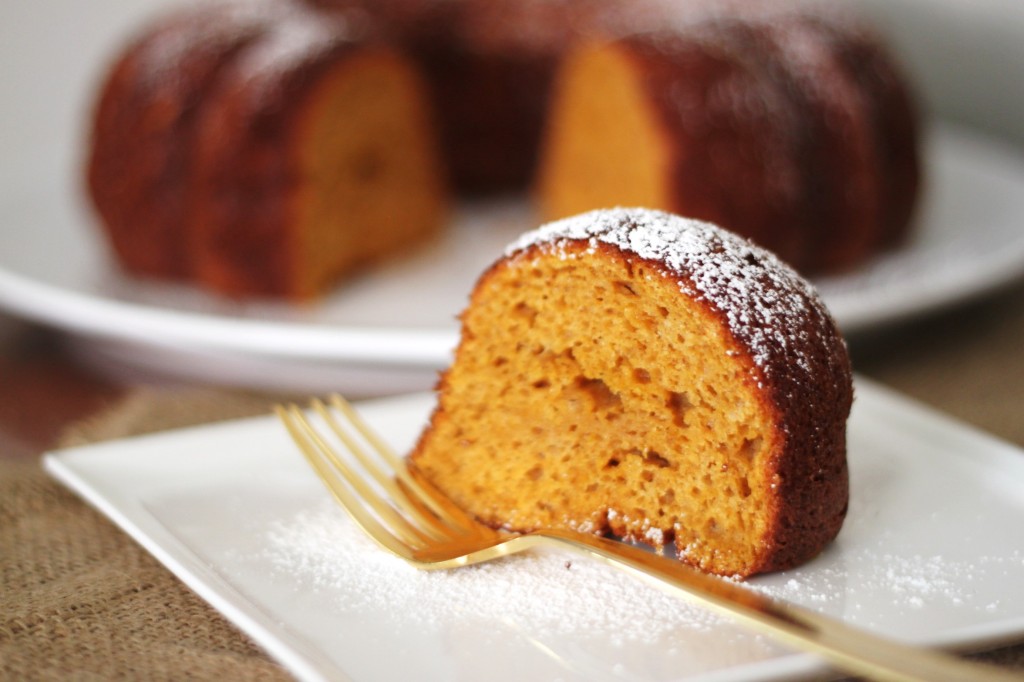 I hope you get to  enjoy this very soon.

In a large bowl mix together the flour, 1 cup of the sugar, cinnamon, nutmeg, clove, baking powder and whisk   together.

In another bowl, mix together the egg yolks and pumpkin puree. Mix the dry ingredients and the pumpkin egg mix together until smooth.

Using an electric mixer with the whisk attachment, whip the 9 egg whites at a medium speed until foamy (about 2 minutes). Add the remaining ½ cup granulated sugar slowly with machine still on. Increase the speed to high and beat until stiff but moist, about 2 minutes.

Add 1/3 of the mixture to the pumpkin batter, fold in with a rubber spatula. Add that combined mixture into the remaining egg whites until no white streaks remain.

Pour batter into the 10 inch tube pan or Bundt pan. Bake for 50 – 55 minutes or until a cake tester comes out clean.

Cool the cake for 10 minutes in the pan.  Place a serving platter over the top of the cake and flip cake upside-down so it slips out of the baking pan.

When cool, dust with powdered sugar.